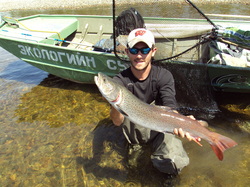 Tyler is a Ph.D. student at the U. of Minnesota - Duluth.  He participated in MAAERI's first hydroacoustic study of Lake Hovsgol in 2009, and followed up with the first published description of the diets and diel vertical migration behavior of Hovsgol Grayling (PDF). 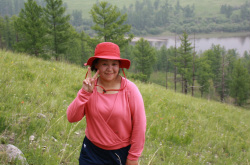 Jagi first joined the MAAERI research team in 2011, when she began a study on diets and growth of common minnow, Phoxinus phoxinus.  This research, conducted under the supervision of Dr. B. Mendsaikhan, became the subject of Jagi's MS thesis at the Mongolian Teachers University. 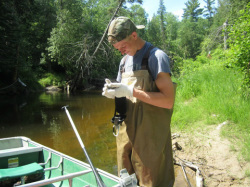 I am a senior at Michigan State University majoring in fisheries and wildife with a concentration in fish biology and management. My research interests include fish population dynamics, conservation management, and invasive species. The past two summers I worked as a technician assisting with Sea lamprey (Petromyzon marinus) research in Lake Huron at the Hammond Bay Biological Station. My research will examine how grazing of the riparian zone affects macroinvertebrate communities in the Eg-Urr watershed. 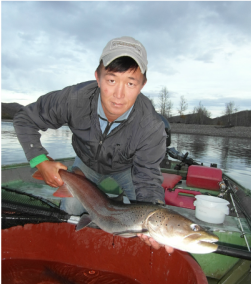 Chantuu is studying for his MS degree at Mongolian Agricultural University.  His thesis research is on a comparison of fish populations in two Mongolian lakes.  He has participated in MAAERI field research at the Eg-Uur River and Lake Hovsgol in 2012. 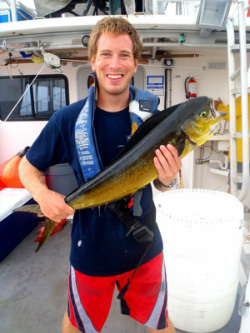 I am a PhD student at Rutgers University with research interests in fish population dynamics, sustainable fisheries management, and marine spatial planning. In Mongolia, I will be assessing the extent of illegal gillnet fishing at Lake Hovsgol and its potential impact on Hovsgol grayling (Thymallus nigrescens). I graduated from Middlebury College in 2010 with a bachelor's degree in Conservation Biology and wrote an undergraduate thesis modeling mahogany population dynamics in the Brazilian Amazon. Since graduation, I have continued this research with a Forest Service grant and have worked at Audubon Alaska on seabird conservation planning and Dauphin Island Sea Lab on fisheries ecology. 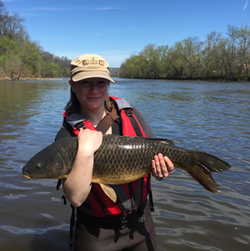 Abigail Golden is a Ph.D. student in the Ecology and Evolution program at Rutgers University. She is interested in understanding recreational fisheries, like the taimen fishery in Mongolia, as coupled social-ecological systems. She has a B.A. from Columbia University in environmental biology and did her undergraduate thesis research on small-scale fisheries in Fiji. Since then, she has worked for the Worldwide Ferry Safety Association, the New York-New Jersey Harbor & Estuary Program, and the Daily Beast. She is an avid SCUBA diver and a volunteer at the New York Aquarium. 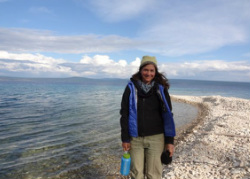 Anna Hermes just finished her Master's at the Institute of Marine and
Coastal Sciences, Rutgers University. She is interested in how carbon
cycles interact between terrestrial and aquatic/marine environments. For
her Master's work, she studied carbon sources and cycling in the Delaware
Estuary, U.S. and the Matapouri Estuary, New Zealand, using stable carbon
isotopes and organic biomarkers. Anna joined the NSF IRES Mongolian
research team Summer 2012 and she is studying the sources of carbon
throughout Lake Hovgsol to determine whether food webs in Lake Hovsgol are
supported by carbon from the land. Anna continues her interests in
biogeochemical cycles and water resource protection as an Environmental
Analyst for the Philadelphia Water Department. 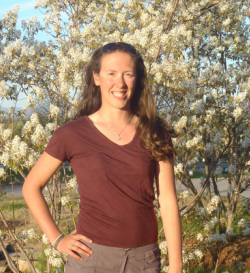 Frances is studying Fisheries Biology as an undergraduate student at the University of Vermont. She became particularly interested in aquatic ecology after spending the summer of 2012 working in UVM's Rubenstein Ecosystem Science Laboratory. For the past year, she has been researching the use of fatty acid signatures as health indicators and trophic markers in aquatic ecosystems; more specifically, she has been studying the potential effects of harmful cyanobacterial blooms on food webs in Lake Champlain. On the 2013 expedition, she will be using fatty acids and stable isotopes to determine the sources of carbon present in taimen (Hucho taimen) diets. 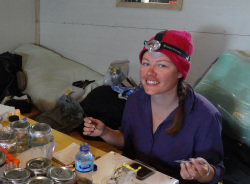 Corey's background is in aquatic food web ecology. She received an MS from the University of New Mexico where she studied aquatic communities in arid-land rivers. Using gut content and stable isotope analyses, Corey studied the impact of young-of-year fishes on invertebrate community composition in isolated pools during summer dry down of the Rio Grande.
Corey applied her knowledge of stable isotope methods in Mongolia during the summer of 2012 to characterize the food webs of the tributaries to lake Hovsgol. In analyzing tissue from each trophic level, she hopes to be able to assess the important resources to the aquatic communities in the lake's tributaries. 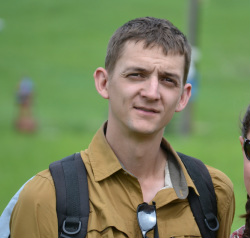 Trevor is an evolutionary biologist from the University of New Mexico.  He participated in the NSF IRES program in Mongolia as a graduate student in the summer of 2012.  Trevor’s Mongolia research is centered on how variation in circadian rhythm genes, such as Clock, corresponds to population-level differences in seasonal timing in Mongolian salmon and grayling.  This research is particularly timely (so to speak) given ongoing climate change and possible shifts in seasonal timing in Mongolian fishes.  In addition to continuing his research on Mongolian fishes, Trevor is currently studying comparative immunogenomics of fishes as a postdoctoral researcher at the University of New Mexico. 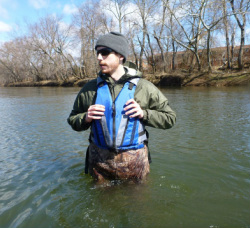 Andrew is a Rutgers undergraduate from central New Jersey, majoring in Ecology and Natural Resources. Andrew’s research interests include freshwater conservation and nutrient flow dynamics.  Andrew’s interest in freshwater conservation is presently focused on the effects of dams on the historical alosine populations of the Northeastern United States.  While in Mongolia, Andrew will be studying benthic secondary production patterns throughout Lake Hovsgol. Andrew plans to one day receive a graduate degree with a focus in limnology, with hopes to change the way society views its relationship with the freshwater environment. 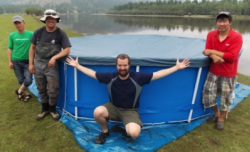 I earned my Master’s degree at Frostburg State University under Drs. Raesly and Seddon. My project focused on mottled sculpin and how sediment pollution was affecting their diet. After leaving Frostburg State, I earned my Doctoral degree at West Virginia University. I worked with striped bass in the Chesapeake Bay, trying to develop chemical analyses to track their diets. My field work included sampling the Bay in Maryland and Virginia), and analyzing samples in Sandy Hook, NJ. Due to my experiences with diets, my advisor asked me to accompany him to Mongolia to work with endangered salmon. We looked at measurements to estimate their metabolism and health. Fish were placed in tanks in the pool pictured to measure oxygen use rates. We spent a month in Mongolia investigating both rivers and lake systems. Once back from Mongolia, I have started to work at Flagler College and am now researching food web dynamics of estuarine fish in the local waters. Please feel free to contact me with any questions: emcginley@flagler.edu. 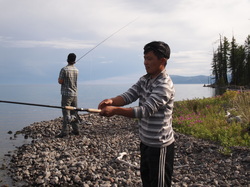 Natsag is an Ecologist and Ornithologist. He began to work with our team as a field assistant in 2008, while an undergraduate at the National University of Mongolia. A native of Arkhangai Province, Natsag has entered a masters program with a focus on the Great Bustard. He joined the 2011 MAAERI expedition with funding from the Mohamed bin Zayed Species Conservation Fund. 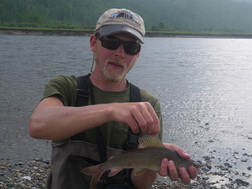 Growing up in rural northern Wisconsin, Kirk’s interest in aquatic ecology was cultivated during the hours spent on the state’s lakes and streams. In 2009, he earned his Bachelor of Science at the University of Wisconsin Stevens Point in Fisheries and Limnology. Between 2005 and 2011, Kirk worked as a fisheries technician for several natural resource agencies, including the Lac Courte Oreilles Tribal Land and Water Conservation Department, Wisconsin Department of Natural Resources and Yakama Nation Tribal Fisheries Department.  Kirk is currently working on his master’s degree at the University of Minnesota Duluth where he is advised by Dr.Thomas Hrabik. For his master’s thesis, Kirk is examining the prey use and niche partitioning of Sharp-nosed lenok (Brachymystax lenok), Arctic grayling (Thymallus arcticus) and Hovsgol grayling (Thymallus nigrescens) in the Eg-Uur Watershed.  Through this research, Kirk aims to provide resource managers and research scientists a baseline description of prey use by these species in the watershed and add to our understanding of resource partitioning in salmonid species. 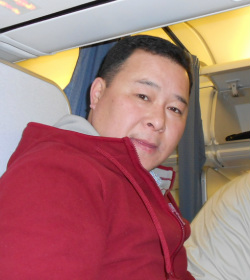 Tsogoo is the Director of the Division of Environmental Impact Assessment and Auditing at the Mongolian Ministry of Environment and Green Development (formerly MNET).  He is pursuing a Ph.D. on movement patterns of taimen under the direction of Dr. B. Mendsaikhan.  Tsogo was part of the team whose work lead to the publication of the first IUCN assessment of taimen. 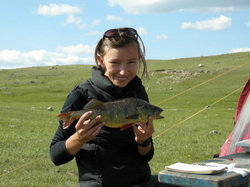 I am a Masters student at Rutgers University in the Oceanography department. My research interests include fish population dynamics and conservation management. My focus in fish populations has to do with distribution, predator-prey interactions, and foraging behavior, and my focus in fisheries conservation has to do with stock-recruitment relationships. I received a Bachelor’s degree from St. Norbert College in Wisconsin (2007) and recently completed a three year commitment with Teach for America in Newark, NJ where I taught high school biology. 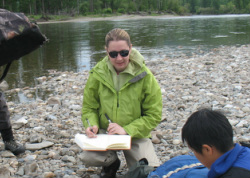 I am a senior at Queens College, CUNY, majoring in biology. I am interested in fish biology, particularly in the evolution of traits and population genetics.

In 2011, I traveled to Mongolia where I collected fish samples from the Eg and Uur rivers and from Lake Hovsgol. My goal is to reconstruct the evolutionary history of fish communities in lake Hovsgol. It is believed that lake Hovsgol has been colonized by fish from neighboring rivers such as the Eg and the Uur, 15 to 10 thousand years ago.  However, it remains unknown if all species of fish have colonized the lake at the same time and if gene flow between the lake and the river has occurred since the original colonization of the lake. In addition, it is unknown to what extent the colonizing species have suffered a population bottleneck at the time of colonization. I am addressing these questions using a comparative phylogeographic approach based on microsatellite and mitochondrial DNA data. 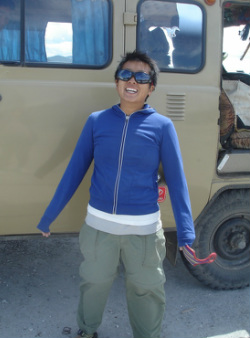 Talia is a PhD student in the Ecology & Evolution Program at Rutgers University.  She is examining trophic variability in Lake Hövsgöl using carbon and nitrogen stable isotopes.  In addition to her Mongolia work, she is using fatty acids and stable isotopes to study estuarine contributions to large predatory fish in Baja California, Mexico, and also monitoring jellyfish abundance and distribution in Barnegat Bay, New Jersey.  Before graduate school, she received her BA in Biology from Swarthmore College, and spent ten years in Philadelphia, incorporating sustainable technology into low-income development and teaching high school biology.  She continues to be interested in science education, minority involvement in science, and how scientists can communicate effectively with non-scientists and contribute to effective environmental policy.