Monitoring and Assessment of Fish Populations 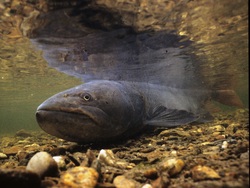 Our fish conservation research focuses on three endangered salmonid (salmon and trout family) species: taimen (Hucho taimen), Asian trout or lenok (Brachymystax lenok), and Hovsgol grayling (Thymallus nigrescens).  The tools we use to monitor and assess their populations differ depending on the population size and the habitat they live in.

To assess taimen population size on the Eg-Uur River, we have developed a long-term taimen tagging project in collaboration with Sweetwater Travel's fishing guides.  Over 700 taimen have been tagged since 2004 with more than 50 of these individuals recaptured.  Analysis of the tagging data resulted in a population estimate of 19 taimen per kilometer of river (Jensen et al. 2009).  Because taimen are relatively slow growing and long-lived (we have found fish up to 29 years old), they are extremely vulnerable to overfishing.

Hovsgol grayling, are a unique fish species found nowhere on earth outside of Lake Hovsgol.  They are listed as endangered on Mongolia's red list because the tributary streams in which some of them spawn have been drying up.  Despite being listed as endangered, they are still the most abundant fish in the lake, and tagging would not be an effective method for monitoring this large population.  Instead, we use hydroacoustics - a powerful scientific version of the sonar "fish finders" used by fishermen.  Our research suggests that there are an average of 34 Hovsgol grayling per hectare (85 per acre) in the open waters of Lake Hovsgol, and perhaps eight times as many in the more productive nearshore waters (Ahrenstorff et al. 2012).


A hydroacoustic transducer mounted on a towbody (left) produces sound waves and listens for the echos when these soundwaves bounce off of fish and other objects in the water.  These echos are processed by a computer (right) to estimate the number of fish in the lake.