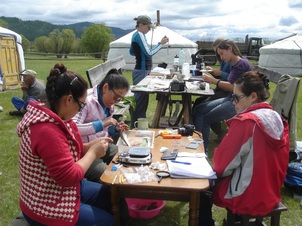 Lake Hövsgöl is an exceptionally pristine lake, with no introduced species and almost no fishing or development.  As a result, it provides a unique opportunity to learn about food webs that are unaltered by humans. Lake Hövsgöl is also unique because it is in an area experiencing rapid warming due to climate change. Therefore, we can study food webs in this lake that have had minimal human impact, but are experiencing effects of climate change.

We are using carbon and nitrogen stable isotopes to tell us about the food webs in the lake and its tributaries. The ratio of 15N (a less common isotope of nitrogen) and 14N (the most common nitrogen isotope) in an animal tells us about its trophic level because that ratio increases with every trophic level, or every time an organism eats another organism.  So the 15N/14N ratio can tell us whether an organism is a top predator, an herbivore, or eating a mix of prey.  Trophic levels of organisms are important because they tell us how healthy a food web is. We can learn how organisms interact and whether these interactions change over time. 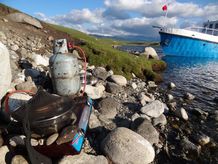 Carbon isotopes give us different information. They tell us about the primary productivity (or photosynthesis) in a lake and its surroundings.  The ratio of 13C (again, a less common isotope of carbon), and 12C (the most common carbon isotope) varies in different kinds of photosynthetic organisms, or producers; algae growing along the edge of a lake has a different 13C/12C ratio than phytoplankton in the center of the lake, or terrestrial plants growing along the edge of the lake.  Examining the 13C/12C ratio in animals can tell us the importance of each of these types of producers to the ecosystem. 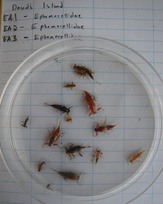 There are a number of reasons why we might be interested the contribution of different producers to the system: a) increased nutrient loading and pollution can cause lakes to shift from primarily benthic (or nearshore) productivity to more pelagic (or offshore) productivity (Chandra et al. 2005), b) if consumers utilize both algae and phytoplankton, predator populations may be stabilized (Vadeboncoeur et al. 2005), and c) terrestrial inputs may provide dietary benefits to aquatic food webs (Kawaguchi et al. 2003). Additionally, if lake food webs are supported by primary producers on the land (leaves, shrubs, trees), we learn about the connectivity between land and water ecosystems (e.g. Cole et al., 2011). This is important for understanding how climate or human activities on land may affect the food webs in distant, but linked water systems. 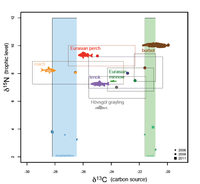 To the left are some preliminary carbon and nitrogen isotope data from fishes of Lake Hövsgöl.  You can see that the fish range in their dependency on benthic carbon and pelagic carbon, and are all within 3.4 units on the nitrogen axis, which is equivalent to a single trophic level, suggesting that all the fish are eating prey at multiple trophic levels.