Feeding Ecology of Lenok, Hovsgol Grayling, and Arctic Grayling in the Eg-Uur Watershed 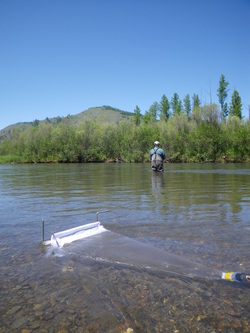 Sampling invertebrates and fish on the Eg River
Lenok, Hovsgol grayling and Arctic grayling are three of the most common salmonid species in the Eg-Uur Watershed. Unfortunately, these species are declining or are projected to decline in Mongolia as a result of overfishing, habitat loss and climate change.  Despite concerns over dwindling populations, limited information is currently available on the ecology of these species. Our research focus was to identify the prey resources utilized by lenok, Arctic grayling and Hovsgol grayling in the Eg-Uur Watershed and to examine feeding interactions among these species. Through this research, we hope to provide future researchers and resource managers with a better understanding of the Eg-Uur food web and feeding interactions among salmonid species.

In 2011 and 2012 we collected lenok, grayling and their prey at several locations on the Eg River, Uur River and Lake Hovsgol. Bottom dwelling and drifting invertebrate prey were collected at each location using a fine mesh benthic (stream-bottom) sampler and a drift net. Fish were captured with angling gear and gill nets. After capture, fish stomach contents were removed using a non-lethal gastric lavage or through stomach dissection. Prey items in these samples were identified, counted and measured, allowing us to estimate the contribution  of different prey types to the diet and evaluate prey selectivity.

In 2012 we also collected fish and prey tissue samples for 13C and 15N stable isotope analysis. Ratios of 15N/14N and 13C/12C in fish muscle tissue, after correcting for differences in isotope assimilation, reflect the isotopic signature of prey that the fish has consumed over the course of several months. By using stable isotope mixing models (e.g. Phillips and Gregg 2001) we estimated the contribution of prey sources to fish diets.

Our preliminary stomach content results indicate that aquatic and terrestrial invertebrates compose the bulk of both lenok and grayling diets. However, grayling appear to utilize prey types associated with feeding in the water column or near the surface of the water (e.g. terrestrial invertebrates) to a greater degree than do lenok. Similarly, lenok appear to be strongly selecting for caddis larvae (a cryptic bottom-dwelling invertebrate) at most sites. Results from our stable isotope analysis are generally consistent with stomach contents, but suggest that fish may be a more important component of lenok and grayling diets at some locations than stomach contents indicate. Because stomach contents reflect what the fish has consumed over a much shorter period than stable isotopes, this may suggest that fish are a more important prey source in spring and early summer. Our stable isotope results have also revealed potential shifts in prey utilization as lenok and grayling grow.

The two figures below show estimates of prey utilization by lenok and Arctic grayling from the Uur River using both stomach content and stable isotope data.
Citations: