Estimating Health and Respiration of Salmonids

Our research focused on estimating respiration rates and the health of several different Mongolian salmonids, including: taimen (Hucho taimen), lenok (Brachymystax lenok), and Hovsgol grayling (Thymallus nigrescens). This work was divided into two different projects, one focused on non-lethal estimates of estimating fish health; and the other focused on measuring the oxygen consumption of these species. 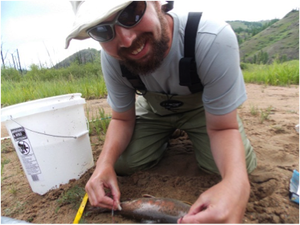 The process of estimating fish health was based on a technique known as bioelectrical impedance analysis (BIA). BIA uses electrical currents to measure resistance and reactance within a fish, which can be used to calculate a fish’s lipid levels. Laboratory experiments are needed to estimate the effects of temperature on the measured values of resistance and reactance. Models can then be constructed to estimate the dry mass and the predicted lipid percentage. Fish are sacrificed to verify the accuracy of the model. Because this technique is non-lethal, multiple measurements can be taken on one fish over an extended period of time.

An established brook trout (Salvelinus fontanalis) model was used to estimate dry mass for the Mongolian salmonids due to a lack of a model in place for these species. Sampling was conducted in July and September 2012 on a total of 151 fish; 98 grayling, 52 lenok, and 1 taimen. Preliminary results indicate that at a length of 300 mm, lenok experience a dramatic increase in the predicted percent dry mass (and as a corollary, predicted percent fat content). An attempt to dry fish using a heating stove in the ger proved unsuccessful; therefore attempts to validate the model may require the use of a drying oven.